The WBCSD-CSI identified energy as a key material risk to be addressed by the cement industry. This is particularly relevant to cement manufacturers in South Africa at a time when the country is facing critical electrical energy shortages and increasing electricity and coal tariffs. As the cement manufacturing process is thermally energy intensive, the impact of these issues has been felt by the CCSA members. 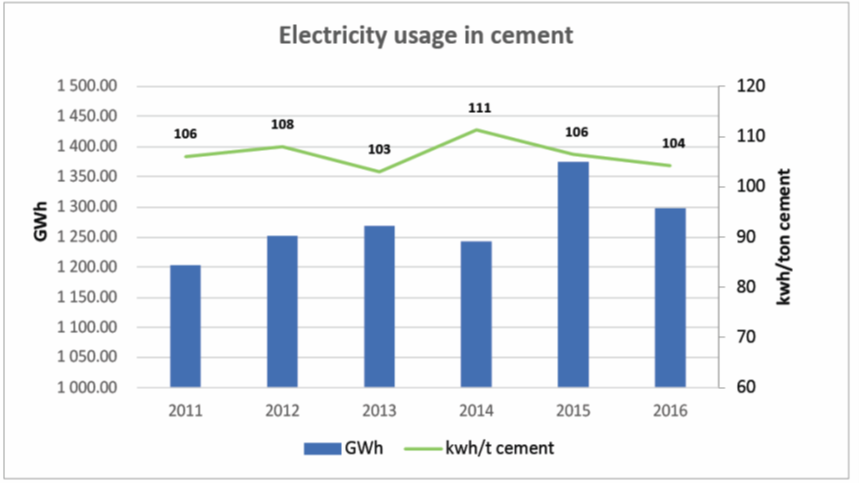 Our members have reported the following energy consumption: electricity used in cement production and heat consumption in clinker production (both as reported as per WBCSD-CSI requirements).

The figures indicate a reduction in the use of electricity per tonne of cement produced and a steady decrease in heat consumption per tonne of clinker produced.

Replacing coal with secondary materials for energy in production processes assists in carbon emission reductions. Due to variances in data capture and reporting, the coal replacement percentage depicted below should not be interpreted as representative of the CCSA but as indication of substitution taking place amongst some of the members. 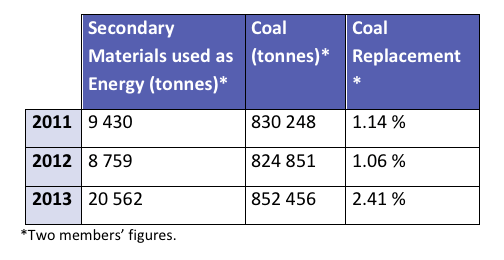 To ensure sound sustainable development practice amongst our members, the CCSA has embraced the following energy management policy to inform it’s members response to both energy demand and climate change.
We use cookies on our website to give you the most relevant experience by remembering your preferences and repeat visits. By clicking “Accept All”, you consent to the use of ALL the cookies. However, you may visit "Cookie Settings" to provide a controlled consent.
Cookie SettingsAccept All
Manage consent

This website uses cookies to improve your experience while you navigate through the website. Out of these, the cookies that are categorized as necessary are stored on your browser as they are essential for the working of basic functionalities of the website. We also use third-party cookies that help us analyze and understand how you use this website. These cookies will be stored in your browser only with your consent. You also have the option to opt-out of these cookies. But opting out of some of these cookies may affect your browsing experience.
Necessary Always Enabled
Necessary cookies are absolutely essential for the website to function properly. These cookies ensure basic functionalities and security features of the website, anonymously.
Functional
Functional cookies help to perform certain functionalities like sharing the content of the website on social media platforms, collect feedbacks, and other third-party features.
Performance
Performance cookies are used to understand and analyze the key performance indexes of the website which helps in delivering a better user experience for the visitors.
Analytics
Analytical cookies are used to understand how visitors interact with the website. These cookies help provide information on metrics the number of visitors, bounce rate, traffic source, etc.
Advertisement
Advertisement cookies are used to provide visitors with relevant ads and marketing campaigns. These cookies track visitors across websites and collect information to provide customized ads.
Others
Other uncategorized cookies are those that are being analyzed and have not been classified into a category as yet.
SAVE & ACCEPT